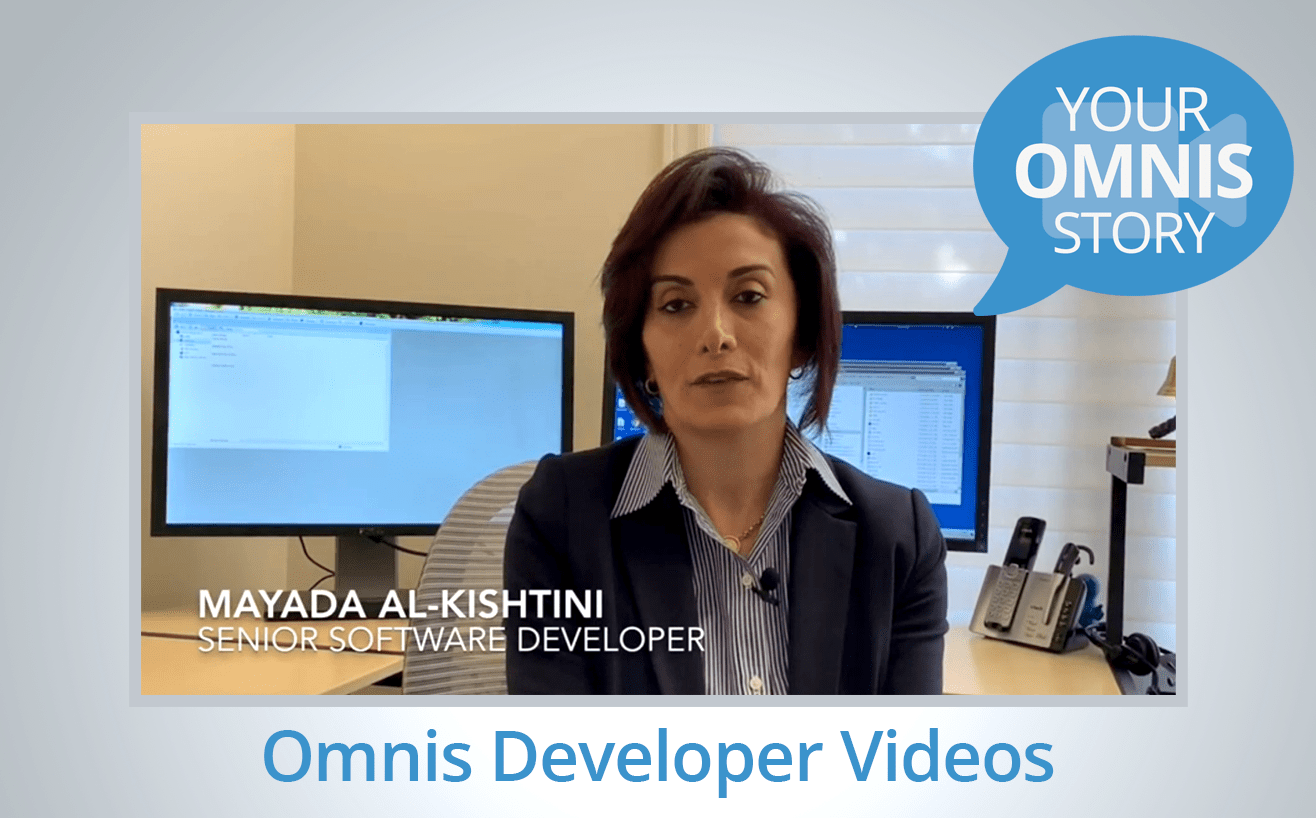 A few months ago we asked the Omnis community to tell us “Your Omnis Story” in a short video. We received some great videos by Omnis developers from all over the world and we want to thank everyone who submitted her/his Omnis story.

The videos demonstrate the wide range of solutions that companies have realized with Omnis and show the strengths of Omnis Studio that are particularly important to developers.

We chose 3 winners, although we loved them all of course, who each received a smart watch and a special t-shirt. We will feature each video over the coming weeks, but first we would like to feature Mayada Al-Kishtini’s video, an experienced freelance Omnis developer from Ontario, Canada. We’ll let Mayada introduce herself and explain how she got into using Omnis and why she likes it.

And a big Thank you to everyone who took the time and produced a video – we were overwhelmed by your generous comments, and delighted to hear all about the different ways you are using Omnis Studio – we are constantly surprised by the innovation and skill of Omnis developers!

All the videos submitted are in a “Your Omnis Story” playlist on our YouTube channel: The video playlist is available here.

And the videos have been added to the Video page on our website:
https://omnis.net/developers/video-library/#yourstory

And here is a complete transcript of Mayada’s video, which you might like to read as well:

Hello my name is Mayada Al Kishtini. I’m a full-stack Oracle certified software developer with 20 years of experience based in Ontario Canada. I started my career as a Visual Basic developer working on client-server applications then I moved to web development using ASP classic and asp.net technologies until 2003. At that point my journey with Omnis started.

I like Omnis for many reasons: first the simplicity of the language. Omnis is a high-level language that elevates a developer to a level where they don’t need to worry about the details of the low-level elements of the software language and the operating system. Omnis also provides a rich development tool and a powerful debugger that allows the developer to be totally expressive and produce a unique and rich solution for the market they wish to serve, in a short period of time.

A particularly neat experience I had with Omnis recently, when I worked on a desktop application that was developed using the Model View Control, I managed to use or to benefit from that design by adding a web interface to the application in a short period of time with minimal changes to the code implementation and the business logic. I basically modified the code a little bit in the controller to make it support multiple interfaces. Using the same technology and the JS client we managed to create a bridge between our legacy application and the Studio application in our migration process from legacy to Studio. I also was able to create a JS client interface to a .NET application using the Omnis .NET objects and the JSON components.

What I also like about Omnis is the library based structure of its application, which simplifies the process of managing and deploying the application to production sites. Omnis maintained its IDE and application structure consistently over the last four decades, which encourages me as a developer to embrace the new versions of the software, knowing that I won’t face a steep learning curve.

All in all, Omnis has enabled me to work on solutions to serve various users and businesses. These applications range from advertisement tracking, job management system, timesheet, dealership management system, which includes CRM, payroll & accounting. In fact all the companies that I worked with so far that serve Omnis applications are leaders in their market which I think is a testament to the versatility and applicability of Omnis as a language.