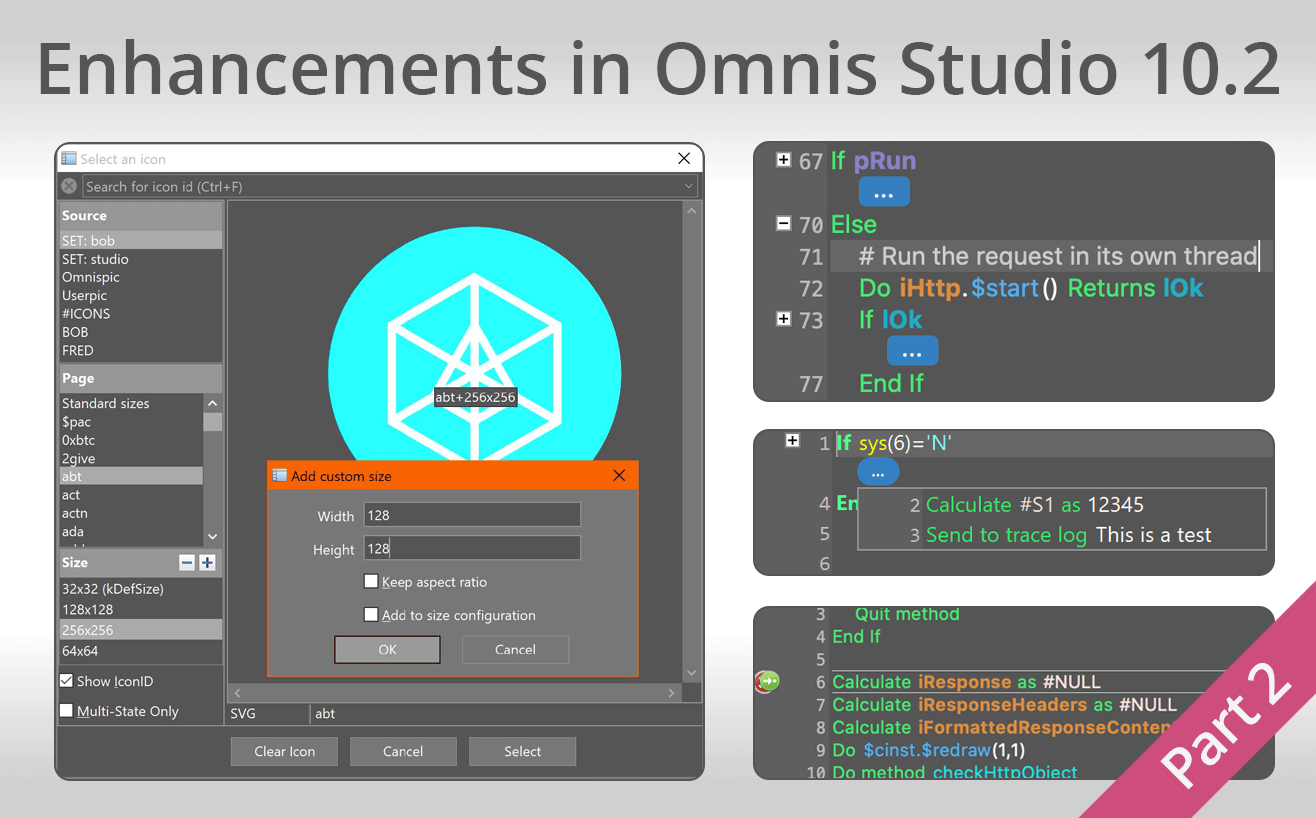 We present a summary of the main enhancements for Fat Client & the IDE in Omnis Studio 10.2 – this is the Second of two parts.

Many new example apps are provided for the new controls and features, including the new Token entry field and Breadcrumb control, which are in the ‘Samples’ section of the Hub in the Studio Browser, or on our growing GitHub repository: github.com/OmnisStudio

SVG support in the Fat Client

Support for SVG icons was added to the JS client for Studio 10.2, but also the Fat Client, so Icon sets can now contain SVG image files, for pushbuttons, tree lists, or wherever PNG icons were supported in previous versions. This enables the use of many open source SVG images (subject to the usual license conditions), or can purchase icon sets from a third-party to add to Omnis Studio:

SVG icons in an icon set use a simpler naming convention, basically the filename and .svg extension, such as “account-info.svg”, and the SVG file will scale to any size & fit the icon area allowed in the control or client area (so the size info does not need to be added to the file name like previous versions).

Now you can have multiple icon sets, so the $iconset property ($clib.$prefs) has been renamed to $iconsets and now accepts a comma-separated list of icon set folder names to be used for the library.

The Select Icon dialog includes SVG icons in an icon set, including all standard sizes plus a “full page” entry for each SVG; for these, the size list contains the default size extracted from the SVG, plus additional sizes configured in config.json. Plus you can add custom sizes via + button in header of size list, and add them to the config.json. 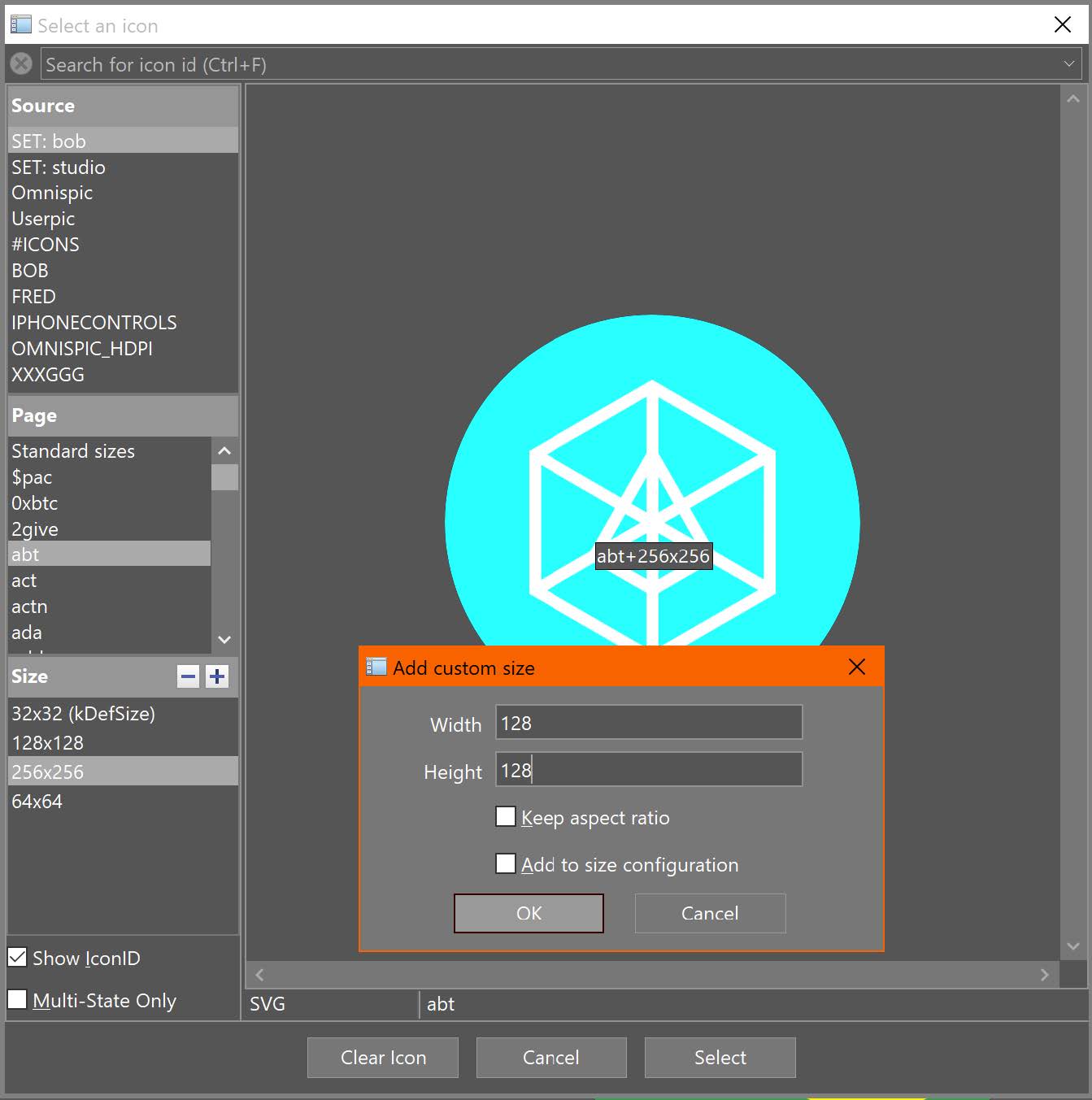 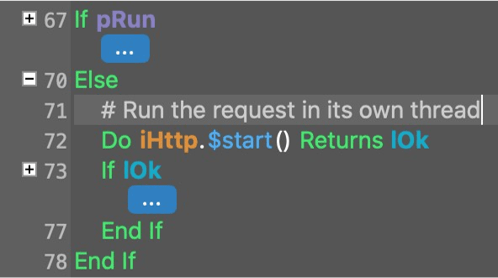 Mouse over the “+” or “-” disclosure icons to highlight the block contents, as shown here in orange:-

Hover over the ellipsis token to show its content in a tooltip:-

The new Word Wrapping feature in the Code Editor allows long code lines to wrap onto the next line (it is on by default); there is a new option on the View menu. Method lines now have a variable height in the editor.

Other Method editor enhancements include:-

The new Position Assistance feature provides Visual guides that allow you to align and resize objects more easily and accurately; this comprises a combination of colored arrows and dotted lines (as shown here in orange, using a dark IDE theme):-

Support for dropping objects from the OS (desktop) on to Omnis has been improved and optimized, as follows:-

Plus there is a new object property $osdropflags.

There is a new OAUTH2 Worker Object which provides support for OAUTH2, the industry-standard protocol for authorization, in the OW3 worker objects including:-

You can use the $authorize() method of the new OAUTH2 worker to obtain the access and refresh tokens. Omnis RESTful port can provide the redirect URI, even in a fat client, non-server version. When authorization has completed, you can set the new $oauth2 property of the HTTP/IMAP/POP3/SMTP workers to the OAUTH2 worker. Tokens and authorization information can be saved in an AES-256 encrypted buffer. See the samples for HTTP, IMAP, POP3 and SMTP in the Hub in the Studio Browser in Studio 10.2.

There is a new property $alwaysfinish which allows asynchronous requests to continue to completion after the instance containing the OW3 object destructs, a so-called “Fire and forget” call; the property applies to the HTTP, IMAP, SMTP, POP3 and FTP workers. When set to kTrue, for requests invoked with $start():

Omnis Studio 10.2 added support for generating OpenAPI 3.0 definitions for your Omnis based web services, which you can use instead of swagger (see the definition here swagger.io/specification) to define an API. RESTful remote tasks can now have a superclass in another library, provided the superclass has no URIs, which allows you to use of framework libraries.

When you select a RESTful service beneath the Web Service Server node in the browser, there are now two pairs of links:

The OpenAPI definition can be retrieved using a similar URL to that used to retrieve a Swagger definition by replacing ‘swagger’ in the URL with ‘openapi’.

The new MultiProcess Server (MPS) for the Linux Headless server provides significant performance improvements in your web & mobile applications, by using a multiprocess server model rather than multithreaded, as in previous versions. The process structure for the MPS is:-

This ensures better use of preemptive multithreading and multiple CPU cores, which provides better reliability if, for example, a child process crashes then the server continues to run for other remote tasks.

To configure the new MPS, there are new settings in the “server” section of the config.json file on the Linux server:-

Requests needing new child process are queued if maxChildProcesses has been reached.

The Deployment Tool was introduced in Studio 10.1 but significantly updated for Studio 10.2; it is available for Windows and macOS, under the Tools menu, then choose Add-ons and Deployment tool…

To read more about all the new features in Omnis Studio 10.2, please refer to the updated Documentation on the Developer Resources website: omnis.net/developers/resources/onlinedocs